I went to Kathputli Colony and had the pleasure to meet Jagdish and his family. We spent the time sitting in a living room area where the open air oven is with some mats on the floor where the family rests. Finally Sumit and Lakhan showed up! 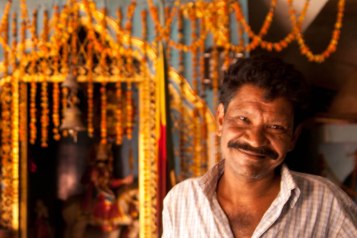 We talked about their plans: Sumit  hopes to become a doctor and Lakhan, an artist of acrobatics, dance and contortionist. We shared memories from Brave Kids (mostly stories that at any point involve someone, probably Jagdish, doing something less “politically correct”) and talked about their daily lives in New Delhi.

Sumit has a constant smile. He cherishes his time in Poland a lot, mostly the people he met in Walbrzych. He has dear memories of first time adventures with his host family, parties and romance (I am carrying in my bag a special message and a gift from him 😉 He would kill me if he knew I told you…

Lakhan’s English has developed amazingly. We were able to speak about many things, which is the main reason I can tell you more about him. I asked him about his life today, and he told me how he is trying to be a real artist. He goes to open school, which means he can come and go as he pleases and just book exams when he is ready. But in reality it means that he is more likely to quit in order to work and practice dance and acrobatics. 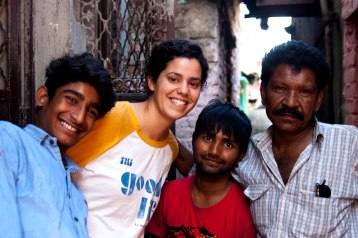 His life has changed a lot with teenagehood. The biggest difference in his life, he told me, is that now he HAS to work. His parents are too old to work he says, and he and his brother are the main providers for a family of six. He feels the responsibility of being the head of a family at the age of 16. But nevertheless he loves to be an artist. He wakes up, does yoga and stretches, has breakfast, and goes to practice. He and his group practice eight hours a day. When the day allows it, he goes to school, when it does not, he doesn’t go. He speaks English in his group of friends, and this is why he speaks this language so well. They all know Hindi of course, but also, they all know that good English is an open door to places outside of India – just take a look at Jagdish or anyone who has been a many times in Europe.

In the beginning of every performance, Lakhan blesses the floor where he is going to dance and most importantly, he blesses and gives thanks to those who made it possible for him to be on stage: his mother and father, and ALL his teachers (of school, of dance, in life, all are thought of). When he thinks about Brave Kids, his thoughts are similar. He gives thanks to everyone who was present in his experience and who made it possible to be so great. He blesses all of them for their contribution to “him being him”, and thinks of his host family in those blessings before performances.

One of the bitter-sweet facts about the trip to Brave Kids was that, even though he enjoyed immensely not having the responsibility of someone who was in a work trip, and even though he loved the fact that everyone treated him like a young son, he felt, after arrival the “after shocks” of having been in a performance in Europe (the “el dorado” for Kathputli) and not have made any money for his family. He is not resentful of this even a bit. He might think of his experience as a “long practice”. As a first experience as a representative of his country, where he considers that, as always, he has given all his best 🙂 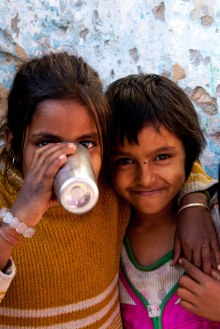 There are 16.7 million people registered in New Delhi, but it is estimated that twenty million total live in this city. That’s half of the population of Poland in an area four times smaller than Warsaw.

It seems to me that not only a tradition of being grateful and humble is present in kids blessings and prayers. But possibly also, the constant reminder waiting outside the door of how small we are in this world, keeps them thankful and conscious of each given opportunity. These kids are so young but so aware. It makes me want to spend more and more time with them to learn all that I can from these wise people.

So I am leaving now to go see Lakhan’s practice.